When to Fix; When to Enjoy

It is Tuesday afternoon and I am sitting at a picnic table at Riverside Park in Grants Pass. A large canopy is stretched out above me saving me from the 97-degree heat. The Ice Cream truck is parked nearby and I have now heard the same 15-second tune at least fifty times putting me into an unwelcome trance. Dozens of children are playing on the Jungle Jim and running through the fountains as parents and older siblings watch from shady benches nearby. And I am calling this work! 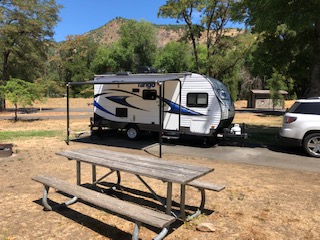 Mobile office at Valley of the Rogue State Park

I am experimenting with a mobile office so that I can connect better with the full reach of the presbytery. It is no secret that arranging time with presbytery staff is a lot easier for the fifty churches that are situated within an hour of the Portland office. Already my experience has been that meetings with church leaders can often be arranged within a couple of weeks for Portland-centric churches. It can take me weeks, if not two or three months, to make the same commitment to those churches two, three, four, and even five or six hours away.

But really this blog is not about that. This blog is about why I decided this morning that the schedule I had put together last night before bed suddenly felt like it needed spontaneous rearranging.

I had anticipated committing the bulk of the first part of the day to work—settling in on my early morning spiritual discipline of yoga, meditation and prayer journaling followed by a full morning of catching up on four days of emails that had built up over a long weekend. Then I would commit to the first draft of this week’s Holy Breadcrumbs.

I wanted to get out on my bike late in the afternoon and also didn’t feel that I would be able to ride with a clear conscience and a light heart until I had answered emails, set up future appointments and got a good start on my Holy Breadcrumbs blog. I was going to use the bike ride as a reward for feeling caught up on work responsibilities.

But I made a mistake.

I opened up Facebook (I don’t even remember what drew me there except maybe some addictive habit). A post about Portland’s preparation for potential violence between far right extremists and far left extremists this weekend caught my eye. Ted Wheeler, Portland’s mayor, reassured the public that all 1,000 police officers would be on duty this weekend preparing for the worst.

I became nearly emotionally paralyzed. In my efforts to better serve the presbytery I hooked up my camper for a full week connecting with congregations and church leaders in the south. But the news of a potential face off in Portland between far right and far left political forces left me pondering, “What is my role as a church leader in these critical and defining moments of our country?”

My head and heart were spinning. I want to live up to the name of Presbyter for Vision and Mission. I want to go the extra mile to make sure that I connect with all of our congregations—Portland-centric and the other half that are scattered across 65,000 square miles. I want to be a healing, hopeful and peaceful presence in the midst of the growing insanity that is engulfing our communities and our nation.

Inside the mobile “office”

But my self-imposed expectation to be all things visionary was clearly too much and I suddenly found myself changing directions for the day. I left the work sitting on my computer and on my small portable camper table. The bike ride that was going to be the reward for getting my work done at the end of the day suddenly became the thing that I had to do to break out of this emotional paralysis. I just couldn’t think straight.

As I took off, my mind immediately went to the texts where Jesus retreated to the mountain, or the other side of the lake, or into the garden to pray. Those texts resonated with me in a way that I had never experienced before. I always appreciated those texts as signs of a healthy spiritual life balancing the need for personal retreat with active engagement. But not until this morning did I understand how retreating can be as much about restoring and saving our sanity in the midst of a growing craziness. This was not about balance. This was about emotional survival. I simply could not take any more information in.

I am starting to understand what real faith is. For the first time I feel like I know what the psalmists meant when they said, “We put our hope in the Lord. (Psalm 33)” It’s hard to find hope in a political culture that is increasingly at war with itself. It’s hard to find hope in our own structures, our own laws, and our own common agreements as they seem to no longer be able to contain our behavior. And it’s hard to find hope in my own abilities as the sheer volume of things that just aren’t right leaves me spinning and running for cover. 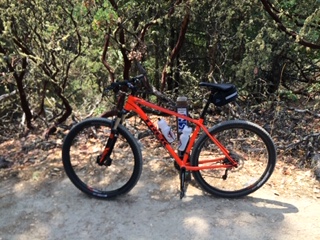 Biking in the hills of the Rogue River Valley

So this morning I make a quick, spontaneous and utterly good decision.  I went to the garden to pray. I turned the pedals for twenty miles and let the air caress my body and my soul. My eyes followed prayerfully as a flock of geese flew just overhead next to a gurgling creek paralleling a farmer’s hayfield. I replaced thoughts of protests and violence with the sheer enjoyment of a body in rhythmic motion. I breathed in and out relishing the simple life-giving presence of oxygen. I let my soul sing and my spirit soar.

Rather than focusing on fixing what was wrong with the world I spent a couple of hours bathing in the world’s goodness.

This morning I enjoyed. This afternoon I am making an attempt at fixing.

It reminds me of the Reinhold Niebuhr’s Serenity Prayer:

God, grant me the serenity to accept the things I cannot change;

Courage to change the things I can;

And wisdom to know the difference.

This faith thing is starting to feel awfully real.