Repairing the World Together

Those are the words on the business card of City Repair, a Portland-based non-profit that I had the chance to visit a couple of weeks ago. I made the connection while reading the book Cascadia: The Elusive Utopia—Exploring the Spirit of the Pacific Northwest. In an essay by Mike Carr, City Repair and its founder, Mark Lakeman, were highlighted as an example of a visionary approach to restoring “the spirit of the village” in a way that the Earth and its inhabitants share a sacred mutuality.

Bringing a neighborhood together around intersection street art

When I first heard of City Repair I had images of a large warehouse where appliances and furniture were restored and then sold to benefit the disenfranchised or those with less means than the average person. I knew that it had a non-profit, mission-oriented purpose. What I didn’t know was that the target of their “repair work” was communities themselves and healing the disease of alienation and isolation that our modern affluent society has forced upon us.

I walked out of the offices and the words tikkun olam came to me. I had a vague sense that this Jewish commitment to do good in the world had some connection to City Repair’s own approach. My subconscious knew exactly what it was doing. Tikkun olam simply means “world repair.” I had just walked out of an office dedicated to city repair and the Hebrew version of world repair showed up in my mind like a cartoon word balloon. 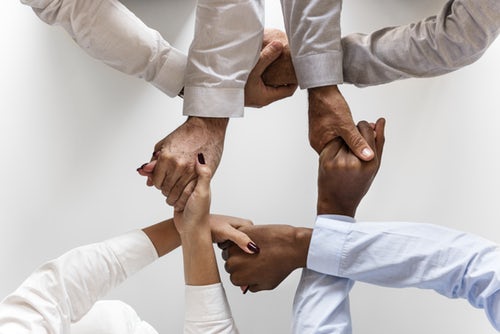 I was struck by how permeable the line is between that which we consider religious and that which we consider secular. Our religious institutions are committed to building community because we have a belief that the “God of all creation” established this as a sacred and essential purpose for humanity. We are more whole human beings when we are connected to each other. Agencies like City Repair also build community, but their incentive emerges from a belief that humanity is at its best and its healthiest when we are connected in a mutual and intimate social network.

I have been thinking about this as I live into my role as the Presbyter for Vision and Mission. I know that that the original language about building partnerships with others in ministry in my job description was focused more on ecumenical relationships—that is, those relationships where we share a common Christian identity and narrative. I remember while I was in seminary during the 1980’s how impressed I was by the ecumenical movement. I had grown up in a wonderfully nurturing congregation, but in hindsight I could see how insulated it was from the larger issues of the world. I loved the emphasis on joining other Christian partners in mission.

But the world has changed again. Fueled by that same initiative to act ecumenically I am wondering if to just be ecumenical is to be insulated from the larger issues of the world. Today I wonder if living out the ecumenical spirit means to be interfaith, inter-religious, and inter-spiritual. I wonder if it means learning how to partner with people and agencies who share a common mission even if they don’t share a common identity and narrative.

I was struck two weeks ago as I left my meeting that City Repair is doing the same good work that the concept of tikkun olam (world repair) advocates. The work is the same. All that is different is the narrative that feeds the work that heals our broken world.

Maybe the lines between the sacred and secular are not all that dark and thick. Maybe we are closer to being on the same side than we thought. Maybe God is happy with anyone who wishes to repair the world and build the beloved community.